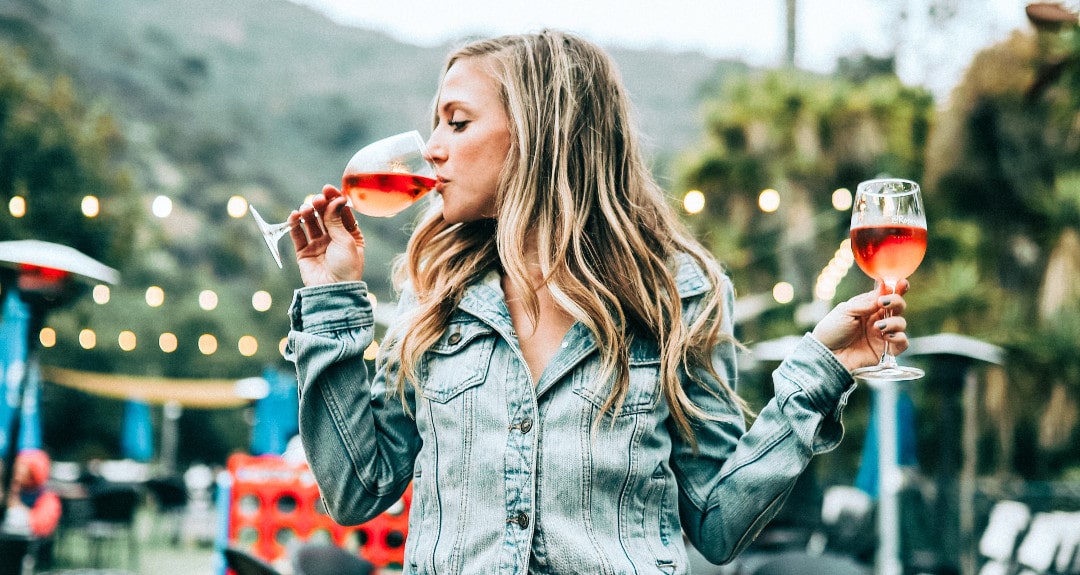 Many sites and fitness gurus suggest cutting alcohol if you want to lose weight, but is it actually the alcohol that leads to weight gain? If so, why do some experts recommend 1-2 glasses of red wine per day? Here we explain the relationship between alcohol and weight loss, and answer the all-important question: does wine make you fat?

Similar to carbohydrates, a moderate amount of alcohol can be processed efficiently and does not turn directly into fat. However, when consumed in excess, fat breakdown slows and extra alcohol calories are stored as fat.

Alcohol is an integral part of many people’s social lives, but is it something you need to give up if you’re hoping to shed a few pounds? The short answer is: not necessarily, but it depends on your drinking habits.

If you have a glass of red wine every once in a while and stop there, then alcohol probably won’t get in the way of your weight loss. However, if you find yourself downing a 6-pack on the couch every other night and still craving more, cutting-down on (or completely abstaining from) alcohol may prove key to your weight loss success.

Alcohol consumption – especially in excess – alters metabolism, decreases absorption of nutrients, increases intake, diminishes sleep quality and negatively affects lifestyle. When combined, these unwanted effects can hamper weight loss. In fact, men who binge drink at least once a week are significantly more likely be overweight than their sober counterparts.

That being said, a number of studies have shown that low-to-moderate alcohol intake is actually beneficial for weight and health. Moderate intake is one per day for women, or two drinks per day for men. Drinking 1-2 glasses of red wine each night may prove especially beneficial for weight loss thanks to the drink’s powerful antioxidant properties.

So, if you’re debating whether or not to give-up alcohol for health reasons, here are some important points to consider about alcohol and weight loss:

Less than 5% of calories from alcohol are stored as fat, so why does drinking seem to correlate so heavily with weight gain? Most of the blame lies on this substances’ tendency to decrease fat burn.

When your body has its choice of carbs, fat or protein to use as energy, it draws on them in that order. However, if you add alcohol to the mix the body uses ethanol first. As result, when you drink your body is less likely to burn fat for energy, which makes it harder for you to get rid of stubborn belly fat. More, 70-80% of alcohol is converted to acetate when it is processed in the liver. Acetate is thought to further slow fat breakdown (lipolysis) when it enters the bloodsteam, so that this alcohol byproduct may make it even harder to lose weight.

Interestingly, one animal study showed that ethanol actually speeds-up fat breakdown. This may explain why moderate alcohol consumption is not associated with an increased risk of obesity, despite the extra calories.

Alcohol has almost twice as many calories per gram as carbs and protein. Worse, the calories do not provide any nutritional value, so they are what experts call “empty calories”. Here are the alcohol calories of some popular drinks:

Wine and beer have more calories than straight liquor because they contain carbs in addition to the ethanol. Cocktails are often much more caloric due to the high sugar, carb and even fat content of mixers. A small (4.5oz) piña colada, for example, has almost 250 calories.

In addition to the calories contained in the drinks themselves, drinking also lowers inhibitions, which can make you eat more. In fact, one study showed that subjects ate 11% more and had noticeably more cravings for sweet and salty foods after just two drinks. Another study showed that, in addition to eating more, women’s brains are also more responsive to enticing food aromas after drinking.

If you tend to drink with meals or grab midnight snacks with friends after a night out, reducing alcohol consumption may make it easier to practice portion control and skip unnecessary snacks.

One in five American adults say they sip on a nightcap to help lull themselves to sleep. However, while having a drink may help you relax and fall asleep faster, alcohol actually decreases sleep quality.

Good sleep is critical to weight loss because it helps regulate satiety and stress hormones. So, getting too little sleep, or poor-quality sleep, because of alcohol can be a major barrier to successful weight loss.

🍷 Alcohol Has a Ripple Effect

Finally, alcohol often has an unhealthy ripple effect. How many times have you signed-up for a Saturday morning workout class, but then had a few too many on Friday night and ended-up skipping the class? Or gone to happy hour instead of the gym after work? Regular drinking often gets in the way of healthy habits, even if you’re just a casual drinker.

So… Does Wine Make You Fat?

No, wine will not make you fat unless you consume it in excess. So, if you choose to drink, do so in moderation.

Aim for no more than one, standard-sized drink per day, and be conscientious of how that indulgence affects your attitude towards other healthy habits, such as portion control and daily physical activity. While one glass of wine (about 120 calories) won’t have much effect on weight, four glasses of wine and a cheese plate at happy hour 2-3 times per week definitely will.

What do you think: are alcohol and weight loss a feasible combo? Whether you’ve gone sober or kept drinking during your weight loss journey, we’d love to hear from you! Please share your story in the comments section below.

Packing lunch helps you save money and lose weight, but the average American still eats out an average of 4.5 times per week. For many of us, these are last-minute meals that we spontaneously grab from a nearby restaurant. Whether you buy lunch because there’s no time to cook, have trouble thinking of tempting homemade… 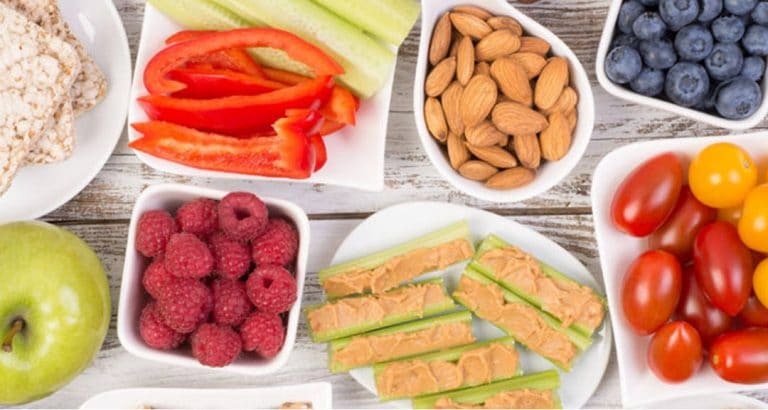 If you’re here, you probably want to avoid gaining the dreaded “freshman 15”. Or you already gained a little more than you would’ve liked and now you want to shed some pounds. Whether your goal is weight maintenance or some quick & healthy weight loss, dorm room snacks should be part of your strategy! Research…

This is a special time of year when we give thanks for the great country we live in, a time to spend with family and friends together in our free nation. While there is most certainly food involved, don’t ruin the hard work you’ve done on your weight loss journey by indulging in unhealthy foods… 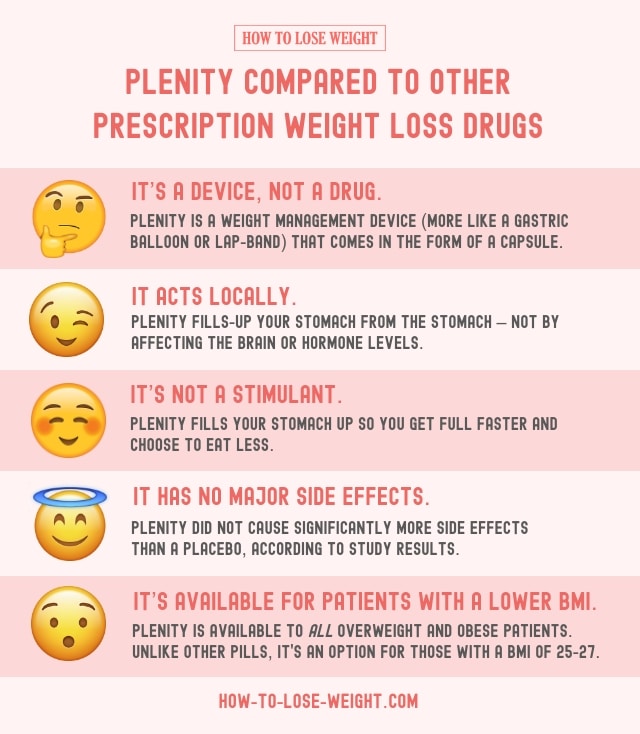 Plenity is the newest weight loss device approved by the FDA. Even though it’s a pill, Plenity is classified as a device since it acts locally (instead of affecting your whole body). So, other than that, what makes Plenity different from the dozens of other prescription weight loss drugs already on the market? Check out…

We all know that too much sodium in our diets can lead to health problems such as heart disease, but reports indicate that Americans are still consuming almost twice the recommended limit every day. In addition to being part of an unhealthy lifestyle, the over-consumption of sodium also makes it more difficult to lose weight as…